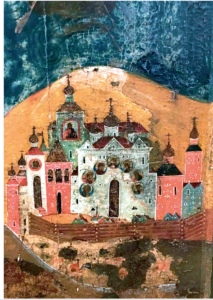 1030 — according to legend, the date of foundation of the monastery by the faithful Grand Duke Yaroslav the Wise, in holy baptism by George. Under him, a wooden church was built in the name of the Great Martyr George.

In 1119, the faithful prince Vsevolod Mstislavovich, together with hegumen Kyriak, laid a stone cathedral, second in size in Veliky Novgorod only to the St. Sophia Cathedral. By this time, the monastery is one of the largest monasteries in Russia, as well as a spiritual and educational center.

In 1130, the cathedral was consecrated, as well as Prince Vsevolod Mstislavovich endows the monastery with significant landholdings, and the legal act recorded about this is a letter of grant, at the beginning of the 21st century the oldest Russian document of this type. From that time on, the cathedral became the final resting place of not only the abbots of the monastery, but also Russian princes, mayors and some saints.

1226 — the abbots of the monastery receive the rank of archimandrite, and are also called «Archimandrite of Novgorod» and had the status of the second cleric after the archbishop.

In June 1233, the young prince Theodore Yaroslavich, the elder brother of St. Alexander Nevsky, was buried in the cathedral. Death befell the fourteen-year-old Theodore suddenly, the young prince was prepared on earth for the fate of a warrior and defender of the Fatherland, but God judged otherwise. He defended Russia by the hand of his brother Alexander, in the person of Theodore the people found a warrior and intercessor of heaven.

On May 5, 1224, the mother of Theodore and Alexander, Princess Theodosia Mstislavna, died, before her death she accepted monasticism in the Yuryev Monastery under the name Euphrosinia, the princess was buried at the southern wall of the cathedral near the grave of her eldest son. Local church veneration of Princess Feodosia — Euphrosinia developed simultaneously in Novgorod and in the north-east of Russia in Vladimir. The location of the relics is currently unknown.

At the beginning of the 14th century, the future saint Moses was the abbot of the monastery, and during his reign the monastery was surrounded by a wall, which is first mentioned in the chronicle of 1333.

In the 15th century, the monastery was one of the richest church owners, thanks to which, despite various calamities and enemy devastation, the monastery grew and expanded.

In 1611—17 the monastery suffered a severe devastation from the Swedish invaders, but during these terrible years of Swedish captivity in the monastery by the providence of God, a significant event for Novgorod and Russia took place — the acquisition of the relics of the holy noble Prince Theodor Yaroslavich.

In 1614, seized by an unbridled thirst for profit, Swedish soldiers began to dig graves in search of treasures. Having opened one of the burials in the St. George Cathedral, they found in it the incorruptible body of the holy prince, having pulled it out of the grave, they put it against the wall, the incorruptible body stood like a living person. Having learned about this, the Novgorod Metropolitan Isidor transferred the incorruptible relics of the blessed Prince Theodore to the Cathedral of Sophia the Wisdom of God, where they still rest.

In 1763, in the Yuryev Monastery, a temple was built in the name of the holy princes Theodore and Alexander, in memory of the discovery of the relics of the prince almost a century and a half later, this church burned down in one of the many fires and was never renewed.

In 1768 — after the decree on the secularization of church lands, the monastery loses most of its possessions, but at the same time does not lose its status, as it becomes the third in the list of first-class monasteries in the Russian Empire.

1786 — marked by the transfer to the monastery of the relics of Theoktist, archbishop of Novgorod from the nearby Annunciation monastery in connection with its closure.

1822 — Archimandrite Photius (Spassky) was appointed governor of the monastery, who discovered the monastery in a deplorable state after a recent fire. With the assistance of Countess Orlova — Chesmenskaya, and her multiple and rich contributions, massive construction and restoration began in the monastery.

The Synodal period also reveals to us the names of three famous ascetics who were abbots of the monastery at different times: Saints Pavel (Konyuskevich), Filaret (Drozdov), as well as Hieromartyr Iuvenaly (Maslovsky).

On December 15, 1921, a directive came in on the expropriation of the monastery’s valuables. In 1924 there were six churches in the monastery, in 1928 only one church, and in 1929 the monastery was finally closed.

In the period from 1920 to 1930, the monastery was robbed and destroyed. During the Great Patriotic War, German and Spanish units were located in the monastery. After the liberation, there were buildings that were far from the original purpose of the monastery: a post office, a college, a technical school, a museum, and people lived.

In 2004, the Novgorod Theological School was opened at the monastery, and the restoration of the Savior Cathedral began.

On April 16, 2016 by the decision of the Holy Synod, Hieromonk Arseny (Perevalov), was elected Bishop of Yuryevsky, Vicar of the Novgorod Diocese, was named Bishop on April 23, 2016 in the Throne Hall of the Cathedral of Christ the Savior in Moscow. He is consecrated on May 3 during the Liturgy at the Holy Trinity Sergius Lavra. The divine services were led by His Holiness Patriarch Kirill of Moscow and All Russia.

At present, the monastery has celebrated its 30th anniversary from the day of returning to the bosom of the Church, many buildings have been restored and restored.